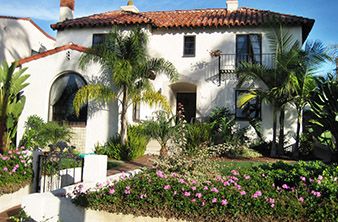 Kensington is named for a borough in London, England, and its pioneering subdivision dates back to 1910. Developers designed this unique neighborhood based on its geography and the non-standard layout due to its location on a narrow peninsula isolated on three sides by steep slopes, much of which is dedicated open space. Kensington offers a miniature "Main Street" along Adams Avenue, replete with coffee shops, restaurants, a branch library the regionally famous Ken Theatre, Kensington Café and Kensington Video. With its stone gateways, ornamental lighting, and curving streets, the neighborhood is a strong candidate for designation as a historical district.

This upscale enclave on the southeast rim of Mission Valley is picturesque, with attractive (and pricey) Spanish-styled homes for upwardly mobile yuppies. It's a peaceful pocket amid the hubbub of the inner city. There's a tiny business district along the single main artery, Adams Avenue.

The subdivision consists of 115 acres overlooking Mission Valley. The Davis Baker Company of Pasadena developed much of the original homes. Famous local architect Richard Requa, who was associated with Davis Baker, brought his distinctive California architectural theme, which had Mediterranean influences.

What Makes It So Special

The original homes and the quiet, winding streets. The Spanish tiled cottage style homes and their immaculate lawns also make the neighborhood stand out.

Kensington is one of the three mid-city urban neighborhoods that whose main thoroughfare is Adams Avenue. It is at the eastern end of the strip that begins with University Heights at the western end, with Normal Heights in-between. Of the older urban neighborhoods in San Diego, it is one of the most desirable to live in. Like its fellow 'hoods, it is distinguished by the classic neon "Kensington" sign that spans Adams Avenue.

Things to Do in Kensington

Like the other appealing neighborhoods in town, Kensington is a great, compact walking neighborhood. Just stroll through the winding roads north of Adams Avenue and admire the homes that exude character. Take in the 3-block business district along Adams of local businesses and eateries.

Best Bets for Eats in Kensington

You must go to for Mexican food. It's been around forever (actually since 1969) at the corner of Terrace Drive and Adams Avenue, serving up no-frills Mexican food at good prices. Local favorite the Kensington Grill offers a hip and stylish setting, and the Blue Boheme, a rustic vibed French bistro. Romeo & Julieta on the southeast borders of Kensington & Talmadge features upscale cultured eats and great wine pairings.

Best Bets for Drinks and Entertainment

The Kensington Club is the place for drinks in Kensington. This venerable, old-school neighborhood haunt is one of San Diego's favorite dive bars. By day, it's a dark and mellow place to chill. At night, it livens up the quiet 'hood with live bands and DJs spinning music. For unique entertainment, there's the art house Ken Cinema, one of the last single-screen movie venues in the county. It's an excellent place to see classic, short and foreign flicks.

How to Get to Kensington

From I-8, take SR-15 south and take the Adams Avenue exit. Go east on Adams and Kensington begins just after the SR-15 overpass.

The neighborhood's eastern boundary is generally considered Van Dyke Avenue. Meade Avenue is considered the south boundary, where there is more of a mixture of bungalow homes and apartment complexes. The core Kensington, though, is acknowledged as from Adams Avenue north.

San Diego, CA 92105
MLS#: 220012207SD
$949,900
1092
sqft
2
Baths
2
Beds
Perfectly charming Spanish home on the border of Kensington. Great curb appeal plus a backyard that's an entertainers Paradise. Vintage features with modern upgrades include: coved ceilings, archways throughout, fireplace and custom Forno Bravo pizza oven. On the interior you will find recent upgrades including the kitchen, master bath with a heated tile floor, new baseboard heat, a whole house fan to cool the home in minutes. Newer windows flood the home with light. This finely detailed comfortable home is a must see for those who want their own slice of paradise. Equipment: Dryer,Garage Door Opener, Range/Oven, Washer Sewer: Sewer Available Topography: LL

San Diego, CA 92108
MLS#: 220012246SD
$899,000
1748
sqft
2
Baths
3
Beds
Welcome to the Kensington Park Villas! This updated townhome features dramatic vaulted ceilings with an open floor plan, luxury vinyl plank floors, new paint, new refrigerator and a new stove. Property has great outdoor spaces with a private patio in the backyard and a large balcony off the master suite. Two car attached garage, a loft in one of the bedrooms, and a small bonus room ideal for an office offer a lot of extra space. You will love its location in the community being next to the residents only staircase that leads you to all of the popular Kensington shops and restaurants! Truly a special community that offers a peaceful, park like setting with a community pool, hot tub and clubhouse yet easy access to Mission Valley, SDSU, and freeways. Complex Features: ,, Equipment: Garage Door Opener Sewer: Sewer Connected Topography: GSL

San Diego, CA 92116
MLS#: 220010638SD
$4,300,000
6158
sqft
7
Baths
6
Beds
Perched atop one of the most prestigious tree lined streets in historic Kensington, this rarely available, canyon rimmed, gated Estate offers complete privacy, unobstructed views and luxury at every turn. Upon entering the welcoming gates, a sweeping circular driveway leads you through mature and lushly landscaped grounds that open to a stunning pool, spa and fully equipped cabana. Continue along a dramatic stone paver lined walkway to the lovingly maintained 1940’s Traditional 6 bedroom, 5 - two 1/2 bath residence. Featuring a thoughtfully designed floor plan with two master suites, a separate wing for the secondary bedrooms, a large office and 6 fireplaces. The breathtaking family room is the perfect place to gather with soaring ceilings, floor to ceiling wood encased windows and curio cabinets, stunning fireplace and sophisticated wet bar. This home is ideal for entertaining with an elegant, formal dining room with an incredible marble fireplace, a gracious living room with original hardwood floors and multiple decks integrating the indoor and outdoor spaces. A separate entrance leads to a large game room, gym, wine cellar, and a full bathroom. Other amenities include a chef’s kitchen, extensive stone and tile work, moldings throughout, and custom window and wall treatments. A car collector’s dream, the home offers two separate, oversized 2 car garages and abundant storage. A short walk from the village of Kensington, charming restaurants, shops, and entertainment await you. Don’t miss a unique opportunity to own a true estate and piece of paradise in one of San Diego’s most sought-after neighborhoods. Equipment: Pool/Spa/Equipment Sewer: Sewer Connected

San Diego, CA 92105
MLS#: NDP2204772
$529,000
962
sqft
2
Baths
2
Beds
Welcome to Kensington living with the charm of local shops and parks within walking distance! If you know Kensington, you know that this is a special area that offers so many unique opportunities for its residents. This 2 bedroom, 2 bath condo is just close enough to all of the fun and a great way to enjoy the lifestyle you have been looking for. This upper level home is tucked away from the street and has trees right out the front patio for privacy and enjoyment. An exquisitely remodeled kitchen features: Butcher Block Counters with Teak Oil, New cabinets, Appliances, Sink and Hardware give an inviting space for all to enjoy! 2 dedicated parking spots and a storage unit make for more flexibility to fit your needs. Lower HOA's and taxes are a wonderful way to make this a more affordable option. This is a turnkey home ready to move in from day 1. Hurry up before this one goes pending!

San Diego, CA 92116
MLS#: 220004731SD
$1,450,000
1403
sqft
2
Baths
3
Beds
Nearly one acre of beautiful QUIET canyon north of Adams in Kensington! This Classic Spanish consists of three bedrooms, two baths plus a studio under the house with small kitchen and a large bath. The studio could be reconfigured quite easily! On the main level the living room is quite spacious with a fireplace, large formal dining room and an eat in kitchen. Direct access to the single attached garage and laundry. Two bedrooms one bath on one side of the house and a third bedroom (added on) and second bath on the other side. Property needs renovation but is on a spectacular canyon lot and a very quiet street. A great opportunity to create a dream home on a dream location! Equipment: Range/Oven Sewer: Sewer Connected Topography: ,GSL