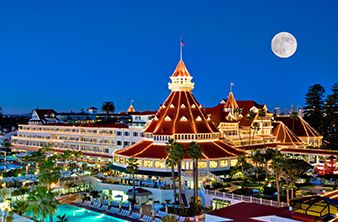 Just over the bridge from San Diego is a small, tree-lined beach haven known as Coronado. The "island," as many locals call it, is really a peninsula connected to the mainland by a neck of land named the Silver Strand. Crown City, as it is called (Coronado means "crowned one" in Spanish), regards itself as a friendly, small town of wide leafy streets lined with Victorian homes and Californian bungalows ... and regards San Diego as somewhere else.

Along with the amicable, small-town atmosphere and near-perfect weather, Coronado proudly touts itself as a car-optional environment. The island is small enough to walk almost anywhere — only a mile from the San Diego Bay side of the peninsula to the ocean. There are also relatively flat paths fit for both cyclists and skaters and even more miles of bike routes along city streets.

The emblem of Coronado is the Hotel Del Coronado — a Victorian pleasure dome that instantly turned Coronado into a beach resort when it opened on the oceanfront in 1888. Other resorts followed, but today the military, not tourism, represents Coronado's largest industry. The North Island Naval Air Station, site of America's first military flying school, occupies the entire north half of Coronado, and Navy SEALs train at the Naval Amphibious Base on the south end of town.

For well over a century, Coronado's beaches have been its fortune. The main beach, Coronado Central Beach, stretches 1.5 miles behind the great houses along Ocean Boulevard. Swimmers, bodysurfers, boogie boarders, sand sculptors, tide poolers and, from December through February, whale watchers all take to the sand and sea. North Beach attracts surfers in the morning, and at the extreme north is Dog Beach, where leashless canines can frolic in the surf.

If you’ve browsed Coronado Island homes on the market, you’ve likely come to find just how varied these properties can be. Coronado Island is home to many stunning historic homes, and just the same beautiful newly-built homes coming on to the market regularly. Unlike some coastal communities with a “development” feel, Coronado Island homes are widely varied in style — from lovely ranch-style estates to charming cottages, to stately Spanish-style homes. Put simply, no two Coronado properties feel the same.

Prospective buyers pursuing Coronado Island real estate can find condominiums in the 500,000 range or in the 1m dollar range, or beachfront estates in the 17m range. The choices can be enjoyably overwhelming — but rest assured, if you’re set on a Coronado Island home, there’s a gem somewhere here that’s going to be perfect for you and yours.

Properties on the San Diego bay often command high prices because they offer panoramic views of the San Diego . Coronado Island homes with backyards on the bay can range in the 6m dollar range and above.

Glorietta Bay follows the curve of Coronado Island along the Coronado Golf Course and this street showcases many of Coronado’s most beautiful custom homes. Homes on the Glorietta Bay can range from 2m to 6m.

Ocean Boulevard runs along the Pacific Ocean and the famed Coronado beach — this boulevard boasts many of Coronado’s historic mansions. In general, the highest price tags on the island are these oceanfront properties. These Coronado Island homes come complete with stunning views of the Pacific Ocean and Point Loma.

First time home buyers and younger families often find a perfect fit in Coronado Island homes between 4th and 5th avenue — streets in this area are innately busier as they are home to the main roads off and on the island — but these homes are often priced a bit more modestly.

Orange Avenue is home to the Island’s charming eateries and shops — the main drag provides a good mental division when envisioning the area’s different geographic enclaves. On the northern most part of the island (north of Orange avenue) is Coronado’s Country Club — homes to some of the island’s oldest properties (many charming ranch homes can be found here). Locals often praise homes on “J” avenue — wide open streets with statuesque trees make the properties on this road particularly majestic.

South of Orange avenue are avenues “A”, “B”, and “C”. Properties here offer easy access to The Spreckles Park and close proximity to some of the Island’s best shops and restaurants. Further south are iconic streets like Margarita — known again, for it’s wide open streets and stunning pines.

It’s hard to even begin to cover the many pockets that hold Coronado Island’s stunning properties — this town truly offers amazing, one-of-a-kind homes at every corner.

Coronado, CA 92118
MLS#: 220012506SD
$2,400,000
2381
sqft
3
Baths
2
Beds
Stunning "forever" views from The Landing #402. This beautiful penthouse - one of the largest in the complex- features an open floor plan with views from the main living areas, vaulted ceilings, expansive windows, large primary bedroom suite with fireplace, guest bedroom with Murphy bed, and a functional loft with an adjoining walk-in storage area as another bonus. Come relax and enjoy the Coronado lifestyle in this spacious and serene condo. Close proximity to the Ferry Landing, restaurants, shops, Centennial Park and Bay. This is a Must See ! Complex Features: ,,,,,, Equipment: Dryer,Garage Door Opener, Washer Sewer: Sewer Connected Topography: LL

Coronado, CA 92118
MLS#: 220011599SD
$3,850,000
3752
sqft
3
Baths
4
Beds
This incredible house is located on 2 lots which can be divided and boasts the best of indoor and outdoor living, with a huge fenced-in private yard and a spacious interior. The freshly updated home features an extra large formal living space with built-ins, wood burning fireplace & skylight. The formal living room opens to a more informal living room/den with great light & views of the yard leads Large eat-in kitchen with gorgeous details opens into a formal dining room. Upstairs features 3 bedrooms & bath plus bonus room. Multiple sets of French doors lead to the wrap-around yard which has both grass and hardscaping, perfect for entertaining and enjoying the outdoors. The downstairs master bedroom has an en suite bathroom with oversized soaking tub, dual vanities, and a large walk-in closet. Upstairs are three full bedrooms, plus a bonus room (perfect for an office space) and updated bathroom. Large closets throughout make for excellent storage. This home is truly stunning. Includes W/D and garage. New tankless water heater. Equipment: Range/Oven Sewer: Sewer Connected Topography: LL

Coronado, CA 92118
MLS#: 220011510SD
$2,498,000
1664
sqft
3
Baths
3
Beds
Come experience a slice of gorgeous Coronado living just a block from the heart of town! All the restaurants, shopping, and entertainment are only a few steps away. Great floor plan with the living space open to the private patio and family room off the kitchen. A larger main bedroom with separate office space is ideal for working from home. Relax in your private lush oasis in the Crown of the Village and enjoy easy walks to Coronado Beach and the famous Hotel Del. Equipment: Dryer, Range/Oven, Washer Sewer: Sewer Connected Topography: LL